a league of extraordinary gentlewomen 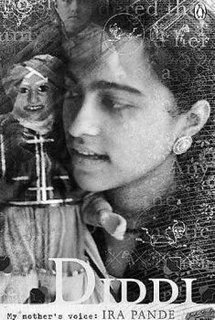 I have been reading Ira Pande's Diddi .
My ICSE Hindi syllabus and the 2 nd language Inter syllabus included short stories by Gaura Pant Shivani . I had always thought the writer was male
It was only after moving to Lucknow that I discovered the writer was actually a lady living in Gulistan Colony down the road from MG Road where we lived .We shared the same circulating magazine library in the form of one Pande ji , a scrawny balding gentleman with a fine nose and a dirty janeyu peeping out of his starched kurta shirt ( these used to be kurtas with collars and cuffs, like shirts ). He used to carry the magazine Desh in his bundle and I discovered that a lady called Shivani used to read it - little questioning later revealed that the lady in question was Gaura Pant Shivani . Pande ji always had good things to say about her which was saying a lot because it cost him a lot to even smile

The book is a remarkable tribute not only to Shivani but also to her mother and her sister Jayanti - the prose is spare but lyrical and evocative - it is the story of everywoman and her mother - I can draw parallels from it to my relationship with my mother and the change of feelings and sentiments as one grows older and understands the other person as a woman with feelings and emotions and not just as a mother .
Daughters are often harsh and judgemental ,unable or unwilling to accept their mothers ' frailties . Ira Pande transcends this so beautifully in her analysis of her mother's feelings and emotions woman .Given the subject matter ,the book might easily have degenerated into a piece of maudlin mawkish sentimentality which it doesnt. It doesnt even teeter on the edge of sentimentality .

Wonderful wonderful writing, one of the best books I have ever read and a marvellous tribute from one woman to another .

P.S. - If anyone knows Ira Pande you might do her a kindness by telling her she can collect her maasi's lost photographs of Santiniketan from my cousin !
Posted by Unknown at 1:40 am

Was it? That great? Your review was no less "Wonderful wonderful writing..."

Will make a note of the last request

you can get in touch with ira pande at irapande@yahoo.com. i'm sure she'll be interested in those pictures. thanks.

I agree completely with your review. Having worshipped the woman as a writer for many, many years, I could suddenly see facets of her that even her most personal writing had not revealed. More people should read Shivani, I always say but then I am just a deranged, rabid fan.

Just read this book. Had never ever heard of Shivani ( Gaura Pant) loved it and love your review. How unfortunate that such good writing,both Shivani's and Ira Pande's, have not been well known all over India.