And so we are in the festive season ... 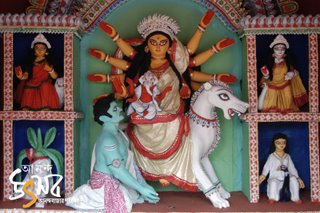 And so the festive season is on us with the goddess arriving on a boat , on wave after wave of flood waters , leaving behind her lush green fields awash with plenty , though how they will remain lush after all this rain is a mystery .

For the last 21 years Durga Puja has been Kolkata based - with much buying of finery and wearing of brand new saris and jewellery on all 4 days .

But other Pujas come to mind - when we were small Nabami meant pulao and mangsho made by my mother in her inimitable style ; the pandal with the sputnik in Gol park , the Bhowanipore pujos and of course the mela in Triangular Park - shifting house on Saptami when I was in class VI , recovering from typhoid ;

the earlier year , Bunu and I crouching on the window sill of the ground floor flat on Anil Roy Road watching the crowds go by , waiting for Baba - Ma to come home , Thakuma clucking in the background over something - the room dim and the light from the green table lamp with the mossy shade , from a very new Rajniklal ,spilling in a golden pool in one corner . Bunu was at that time small,skinny and frail and used to cling to me for comfort ,assurance ,security ,love .In the small walled garden there was a shiuli tree and the grass beneath used to be strewn with the tiny white-orange flowers which we gathered for my grandmother and for Bui who was our landlady and Kunal Basu's pishi .

The music that played over the loudspeakers that year was "Kon shey aalor sapno niye jayno amaar .."over and over again till it was imprinted in my brain .

In the process of growing up we went through new shoes and blisters and dresses that looked stunning when we bought them but not as good when we wore them , but that was part of the angst of adolescence .We admired the tall stalks of kaash flowers that Baba brought from Salt lake on his trips that side.

And then we relocated .. to a place where the changes between seasons were sharply defined and autumn meant autumn with bright blue skies and cumulous clouds massing and horizons meant horizons and the sun always rose over the purple hills in the distance . There were scattered pujos - the town being a cosmopolitan one nevertheless had a kalibari and a sizeable Bengali community . It was serene , peaceful and one day very much like the other provided the library was stocked and there was plenty of good food in Ma's kitchen and a small party of "like minded "people ..and then we relocated again

This time I knew nothing would be the same again . There was a huge jaam tree in the front garden and the house was spooky and many roomed .and I was sent off to study in a university town and when I came back - that was the deadliest Pujo and the end of the world . Oh I cried for the end of so many things - the serenity of my childhood home , my father dead at a young fifty and my stunned mother who lost half her spirit on that fateful day , and all that was good and nice ,I mourned for my lost childhood and lost faith .

I was twenty two, my sister seventeen and we realised then what impermanence meant, what mortality meant and what it meant to grieve and mourn inside one's home , parentless , when the rest of the world celebrated . Suddenly there was a sharp distinction between us and other people our age - they had a father and we didn't.

Whenever sharad comes around with its blue skies , masses of white clouds,kaash , shiuli ,Durga and dhaak , I take a little time and space off in my mind and mourn for my father who might have been around , raising a toast with his sons in law , one arm around his adoring wife's shoulder ,spoiling the grand daughters he never saw - seeing himself in the older one and her manic obsession with books and music and the younger two ..and giving a little bit of himself ...to his two girls as well ..

Enjoyed reading this post! One day, I have promised myself, I will visit Kolkata during Durga Puja...one day.

This blog showed against a google search of my name. Indeed, Bui was my pishi. It appears that you (and family) were her tenants. In the absence of your name, I can't place you and the curiosity grows...
Enlighten, me?