A touch of reality ?

On a recent visit to Jharkhand , near the Dasham Falls we came across a group of Adivasi women and their children. The women run a couple of tea stalls with flasks of cheap rum and sprouts on the side and a bowl of batter ready for making pakoras should anyone want them. The grandmother had a gaggle of children around her - well behaved , quiet children who giggled when I took their picture and were amazed to see themselves on the LCD screen of my camera . Before accepting the packets of biscuits which AG gave them , the oldest , around 8 , looked at their mother for permission and then proceeded to share the biscuits with all . 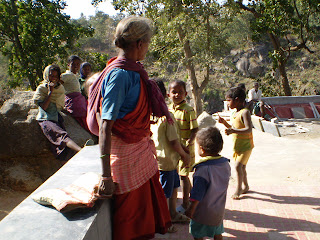 The child in the middle partly screened by Granny's bag had a hideous burn mark from the middle of his head right down to his neck . When I asked his mother explained that he had crawled into an open chulha ( clay oven ), head first , when he was a baby.It is a miracle that he didn't die , she said . I disturbed these two babies at their meal - gathered around a thali and being fed in turn by their older sister . As our car slowed down and I held up my camera , the older kid let out a bloodcurdling howl which prompted the driver to speed up ! 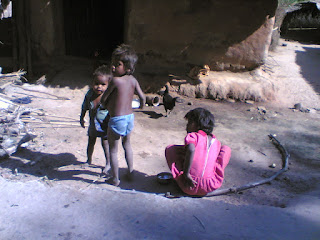 This girl must have been all of 15 and the child with her was a year old . She was selling some of the most beautifully scented gandharaj lebu . I bought 2 huge ones for just Rs 2 /- and after coming back to Kolkata and slicing them, I closed my eyes to inhale the superlative fragrance and , realised that I should have bought many many more 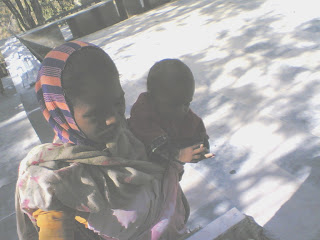 I so enjoy your postings about your trips. Thanks for letting me tag along.

I hadn't heard of the Adivasi women. I googled them already. Thanks for sharing! Have a great week,

It is when I see children like this that tears well up. Why is all this development reaching anywhere near them. Isn't all this reservation meant for uplifting these people?
Crawling into a chulha - god, I ccan imagine the conditions they must be living in.This post has really made me feel sad and helpless.

That poor child who crawled into the chulha- how terrible. What is gandharaj lebo? (It sounds like a lemon to me)

Onedia - welcome every time!
La delirante - great !
Usha / Dipali - It was so terrible - the development has not reached them neither is it meant to be , I think. Reservation is meant only for the educated and uplifted class which is quite capable of taking care of itself.

Onedia - welcome every time!
La delirante - great !
Usha / Dipali - It was so terrible - the development has not reached them neither is it meant to be , I think. Reservation is meant only for the educated and uplifted class which is quite capable of taking care of itself.