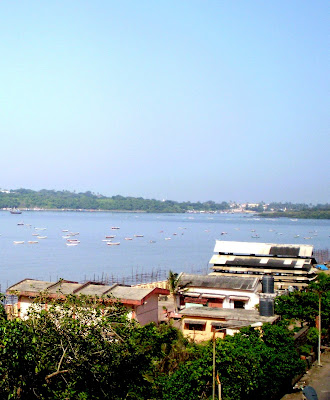 The sea is just across the road , a wide crescent split in the middle by the apartment house opposite . It changes colour at various times - from a misty grey blue early in the morning brightening to a tranquil blue and then in the afternoon to a golden shimmer ripple stitched through with hot white sails of the fishing fleet to the dark indigo as dusk falls and the lights come on across the bay , till late at night when all you can see is the pin dots of bright light on the opposite side and the rest is an inky basin.

There is not much work after getting the man ready for his office in the same way that his mother used to get him ready for school and just in the way he expects .There is a great to do about the trousers and the matching shirt, the tie and the socks , the car keys , the cellphones and chargers and the wallet , all of which you would expect a grown man to organise on his own , but no it has to be the way Ma did it and she does it with devotion.

After that all she has to do is cook and then the whole day is at her disposal . To clean or not to clean -is a dilemma but then she decides it is better to clean ,although the two maids have done their job; to tuck in the corners here and straighten the objects on the shelf there - the house is os stamped with the man's mother's touch , as to be a complete replica of the one they have left behind in another city .

Lying on the bed she can tell the time , just by watching the sea through the window .

The sudden vicious slash of music from a speeding car or, the pigeons roosting in the recess above the window ,suddenly busy with their billing , cooing and fluttering of feathers ,an anachronism in this city , wake her up from her dreamless sleep in the afternoons. 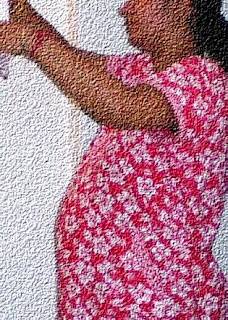 Most times she is on the bed watching television, or the sky and sea ,and the pigeons . She does not like books , nor does she care about the work she once did with such finesse - the feel of the textiles, the paintbrushes, sketchbooks, the tools of her trade are all relegated to a small secret alcove in her memory - dark and unlit.

At times she glaces sideways at the mirror in between her chores , checking the gentle swell of the tummy .

She cannot ride an auto ,she has been expressly forbidden by the the man's mother to get into a cab on her own or even to walk down the road towards the sea , ahead . Her ouutings depend on the man's convenience .

So she waits - patiently with her unborn child , somnolent, lethargic , quietly watching in this seamless ,dreamlike state ,with the days fusing into each other ,waiting , maybe plotting a strange and sinister revenge in which she will have the child as an ally .

She is a qualified designer but she does not do any work , she does not read , she has no friends . It is strange , this transformation from an eager animated girl , so active , so full of dreams and ideas . When I drop her at the house after a day well spent in shopping and eating lunch out she holds my hand tightly as if she is reluctant to let me go.

When I look back from the car I see her standing oddly alone and frail, the tall house rising menacingly behind her .

Email ThisBlogThis!Share to TwitterShare to FacebookShare to Pinterest
Labels: familyand other strangers

OH Eve, who is the young woman? Blessings to her and unborn baby.

So sad... I wish she could tell her man to grow up and get on with her life. But I know how it works sometimes...

@HG- Family. Baby's due next month -looking forward to it !
@Namesake- Yes - sad and lonely girl- she's the sweet trusting type- makes you want to go and shake some gumption into her.

Hope she has a safe and sound delivery and gets back to Life!
Lovely imagery, EL:)

Aww..what is it with men, pregnancy and such? She can ride in a car or take walks right?

Wishing her an easy labour.

evocative post! hope she is free of her imprisonment soon with the birth!

This was a super piece of writing - the beginning with the description of an unfettered, yet self-contained, passive sea, and then the description of a woman imprisoned behind invisible bars. How poetic. And then the reality of it sinks in, and the usual feelings: sadness, frustration at things still having to be this way, and anger that she can choose to rock the boat, but won't.

she is pregnant naa not sick? why this house arrest? is it high risk preg? safe delivery to her

heres wishing here LOTSA happiness and joy when the baby comes along and the support from people she loves.

who is this girl.Why is the pregnancy a burden on her?any health problems?Are in laws responsible for her indifferent attitude?Wish her a safe delivery,will you?

who is this girl.Why is the pregnancy a burden on her?any health problems?Are in laws responsible for her indifferent attitude?Wish her a safe delivery,will you?

@the younger ones- Nope she only has an MOL who has terrified her into not going out +she's a wimp - maybe too tired to fight back like so many of us .
Yes - I hope too , means a grandkid by proxy for us ,

Oh dear..why are woman so trapped into these preconceived roles of what a woman should be? It happens the world over even in the UK where women's liberation has been around for a long time. I dislike these stereotype portrayals of how us women should be.. we are thinking, feeling individuals and not slaves to men.

The thing which is always flumoxes me is - why don't men realise that if their wife is happy and content and functioning as a proper human being then there is more love for the husband/partner and in turn their own lives become richer and fuller.

Suppression of one's individuality is a terrible thing.