The house she grew up in was a tall 3 storeyed yellow building bordering a park . The windows had green shutters and the front door which faced the east had a beautiful stained glass panel which caught the sunlight in the morning and painted beautiful patterns on the marble floor . There was a doughty old grandmother who ruled the house and a beautiful tall dark mother with long hair . There was a doll burnt in a bonfire of foreign vanitie, together with frilly fancy frocks ,by the father who suddenly went swadeshi .
All this suddenly vanished when the father took a bad business decision and the family was suddenly doomed - two children dying , the mother too, after a while from tuberculosis and the rest of the children parcelled out to relatives , as the father also passed away .
Now , in all of this , the girl had no chance to find out what affinity she had with nature and the earth especially .That came later , when she married the Man she went to college with, finding love and security and the comfort of a home she could call her own .
The first houses they lived in were apartments and it was only when she went to Jamshedpur , that the idea of a potted garden struck her and she discovered that she had green thumbs . The collection of plants then travelled with her wherever they went in the course of duty - the little cactus plant with hard thin bony stems and the loveliest tiny red flowers , the crotons , the curry leaf plant , the strange plant with the bloated stem sprouting deep pink flowers, the roses which bloomed in an almost rabid frenzy ,the bonsai bodhi ,innumerable plants and cuttings .
For some time when the Man was very very sick and there was tumult raging in the small secure haven she had created , with her husband and the two girls ,she put them on the back burner and when the Man died and she relocated to a small University town , she planted this cactus . 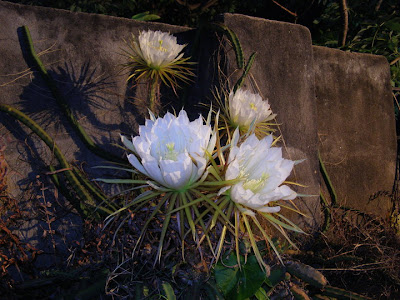 It blooms once a year in the height of summer and has a faint lingering fragrance that stays even when the flower has dried . There is something ephemeral and ghostly about its almost mystic beauty , its sudden appearance and its sudden departure . 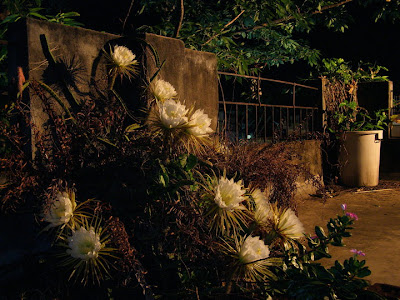 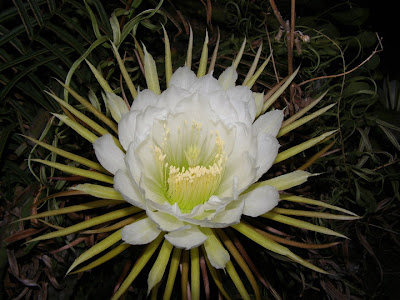 ( Photos - courtesy Manjari Chakravarti)
She has been gone these long ten years ,a time that seems to be so compressed as to be almost yesterday . Sometimes one turns to the phone to ask her a question or seek a frame of reference and then the sudden pang of realisation that she is not there any more ,is so sharp and sudden that it is almost like a physical pain , so pure is the agony .
And then suddenly something like this comes . It is physical - this feeling that she is reaching out to comfort and reassure and then one realises that this is the hardest thing to endure .
Posted by Unknown at 1:09 pm

Oh, goosebumps and a hint of tears. This was lovely. I love this sort of writing best, when you do it. Who was she?

I couldn't stop myself writing here, I am so moved by your post, so heart-warming to read this.Every word echoed your feeling here.
Pain and suffering is a part of our vicious life cycle.If we dont feel pain,then perhaps everybody would have become God.
Gorgeous flower to look at.
hugs and smiles

Been here first time, liked your stuff esp the tag

hey...that was a wonderful writeup...
Its so touching..
liked it sooo very much..

Pain and suffering gives life a good reboot..
we become more human if we had treaded that path.

Brat- yes there is
TC - Not something I do well these days I'm afraid .That's Ma I'm trying to talk about . She died on 18/7, 10 years ago and she was a plant and flower fanatic
Jaya - Thanks for dropping by and the hugs and smiles :)
Sorcerer - Thank you . But I dont like pain and suffering that much .
Pesto - hello and welcome :)

Oh EL, hugs! What a beautiful, fragrant memento of your mother!

what a lovely story. and such utterly beautiful flowers.

you know when i was reading your post, i kind of guessed that you were talking about your Ma... it came through the pangs and aches and in the reaching out for the telephone. beautiful post. can't say i feel what you feel but in a way i think i know how you feel.

yes, while reading it I realised it was about your mother.She sounds like a wonderful lady with an indomitable spirit.
The flowers are beautiful.

Goosebumps...ki shundor likhecho. The current background and header of your blog along with the story, did something to me.

Sue ,Banno, Sharbori,Dips,Sandeepa- The tragedy is that I don't remember having seen this flower -my sister posted the pictures on fb sometime back - but its just one of the many flowers that still continue to bloom in her garden .

Hello - Its good to see that you are still writing - we had exchanged some notes on my blog long time back! Very nice post.

Lovely story. So well woven around the pictures. The pain, is so different, unlike any other.