In Mumbai the colours of the sky are reflected in the angry gun metal of the sea as they crash against the buttresses . The sea around Haji Ali which normally sparkles iridescent with light in the afternoon is drab,dreary and grey , a colour repeated in the wings of the hundreds of pigeons wheeling above the trees further down . 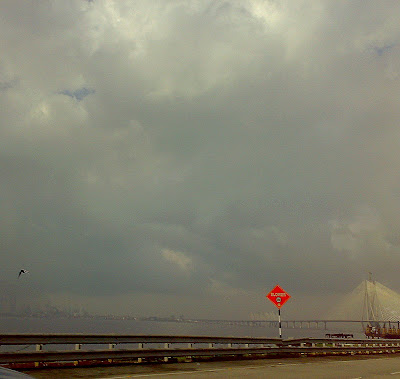 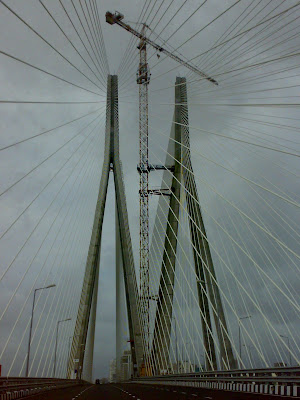 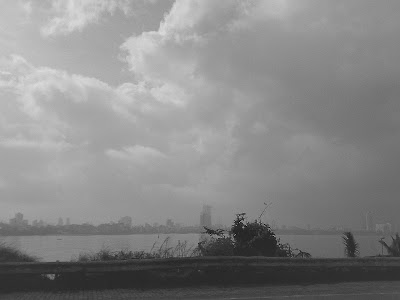 a colour repeated in the wings of the hundreds of pigeons wheeling above the trees further down the road . 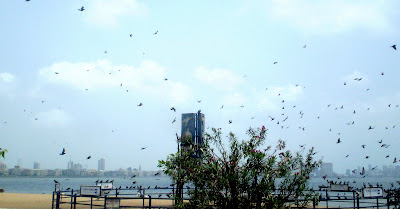 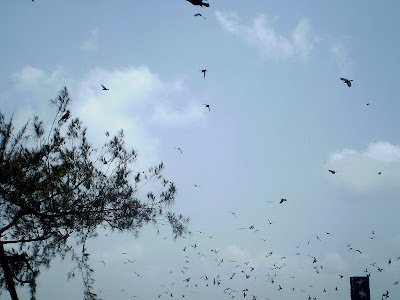 In Fort we eat lunch at Britannia on the ground floor of Wakefield House ( no not Weikfield). As there is a crowd we sit outside for about ten minutes, watching a TV crew from BBC doing the rounds . They speak Bengali - all of them . Inside we meet Mr Boman Kohinoor Irani pushing 90 , who seats us at a table and asks me where we are from .
He's a gallant old school gentleman and suggests we order the sali boti, dhansak , sweet rice and the berry pulao which we devour with gusto . He also wants us to order lime sodas to beat the Mumbai heat . Never mind that its actually very pleasant that afternoon . Later we eat chocolate mousse which is rather like Nutella - thick chocolate clogging your tongue rather than a light airy dessert .
Mr Irani loves us because we are from the land of Tagore , Santiniketan, Vivekananda and Netaji . He professes to hold Netaji in higher regard than he does Gandhi . He is also a devout anglophile and shows us a card from old Blighty with the Queen's picture and proudly declares her to be Queen of the whole world .
Myth has it that there used to be a live rooster on the counter . Now there is a cat lying supine and being stroked by a small child who hangs downwards from her father's arms . There are 20 kilo rice bags stacked on a window sill . The eating area on the mezzanine has sturdy 60s table fans tacked on to the balustrade to circulate air . The plaster has peeled off the ceiling , the rusted beams are exposed , the air downstairs is circulated by long stemmed ceiling fans and the wall clock , another antique tells the time . 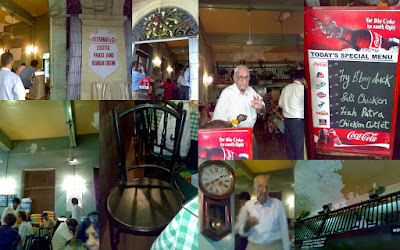 On the Worli seaface , people sit on the broad parapet . Each has their own space , doing their own thing , entirely oblivious to the world .
Young people , a couple -arms wound around each others' waists , a couple of hijras sitting quietly for a change , munching something from a packet , maybe peanuts, three boys horsing around,two girls with their bags on the ledge y , a group of men , a dog with his ears straining back , four crows - all sitting companionably. 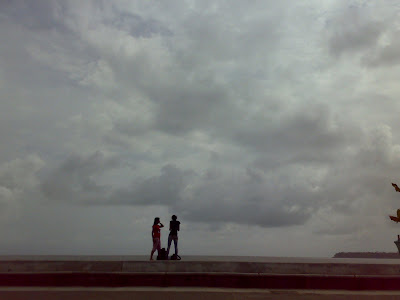 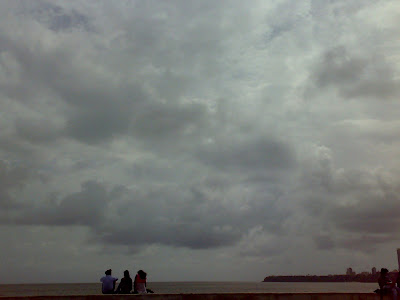 The entire palette is a drab grey - brown-black repeat, except for a woman in a brilliant pink sari ,loose hair and a pallu end which suddenly lifts in the breeze as she plays with an anklet and streams in a vivid pink pennant against the sky.
Posted by Unknown at 11:25 pm

Email ThisBlogThis!Share to TwitterShare to FacebookShare to Pinterest
Labels: monsoons

'ali boti, dhansak , sweet rice and the berry pulao' it all sounds delicious ;) and of course, the chocolate mousse.

I read this post in blazing New England sunshine, the smell of Indian rain was so much like home, so earthy, and so far away.

I loved the way your blog post made me feel - like I just got drenched in the Monsoon. It also made me want to pack my bags and travel all of a sudden!

He probably knows the great 'uns from every state, and will profess to like them above all others :-) Jokes apart, some of the establishments hold the allure they do for the folks who run it, characters to cherish.

You went to Cafe Britannia!!! I love that place :) And you know, the "fresh lime soda sweet, to beat the Bombay heat" is his staple! I've compared notes with others. I'm planning to go on Thursday :)

And thanks for seeing Bombay in such lovely words. Or is it the other way round? Yes, you saw the words in the city. I loved it.

Nice pictures. I like the grey and the clouds in the pics, but not so much so in real life. It's been pouring and pouring and when will the sun come out, and us really need the lemonade? :)

Orange Cat - sending plenty of raindrops your way .I guess Mumbai is tired of rain.

Meera - welcome to my world and thank you :)

AnilP - The more eccentric they are the better . You are absolutely right !

TC - I think this place is going to be a regular from now on its so close to the office .I love Bombay - its so rich every which way you look at it .

Banno - I heard about that rain . Boring . You need a hot cuppa is what I'm thinking :)

Suku - pack those bags and come !

It was near Worli Sea face - the place I grew up long long ago just when I was six. Our house overlooked the sea front and I remember trudging along a neighborhood aunt and her children and falling on a slippery rock.the pictures are fabtastic and Mr. bomman Kohinoor seems cute.Did you have a good time in Aamchi Mumbai/

Spectacular photographs !!! Lovely blog and I am book marking you right away.

Thanks for stopping by my blog.

Dear Eve's
I feel good, reading your comment at my food blog....I am really not doing any thing big on Bong dishes...but want to..
But thank you so much for visiting my blog else I wouldn't have got the opportunity to see this wonderful blog of yours!!
Let me see what all you have here...but must say the BW photographs are very nice and daring..every one wants to see color nowadays...not through the eyes but thru the photos....
I wish you start posting again the nice recipe blog...I am going to make the vendi today ...
Have a nice day

PS I liked your comment " Sali boti is a rich mutton...." must be a close friend of yours...

Dear Eve's
I am sorry,,, refer my earlier comment ...the photos are shot and posted in Color ..did not see it properly .. I was engrossed with the composition ....
wish you happy and serious photography

Clicked to get here from Ushnish's blog n am happy i did. Saw both your blogs and must say you write so well.
i see myself coming here again n again.

hey, you have photo of irnai cafe, very nice. the rain pics are pretty and i love your last paragraph. vivid, pretty and as though i could touch her!

Love the shades of Grey!
Hope to keep visiting your Blog.Its lovely!

Oh yes, I was in Mumbai in Jan this year, and the air was so polluted, the same grey hung heavy in the air. It did not detract totally from the beauty of the surroundings as you have captured it so well. If only the grey was not so evident!

Padma - memories :)
Ushnish - thank you .
geeta /sangeeta - welcome - you two have lovely blogs :)
Sharbori - the food was to die for !likhbo farmville kheltey byasto
Radha - it was grey grey grey throughout
Yasmeen - hi :)
Dibakar - thank you. I am very fond of Bombay

I saw this in "New England sunshine",perfectly compiled..

Wow ! I just loved your post, it is arresting yet so simple.
Many years ago I lived in Bombay for about 5 years, I hated every minute of my stay there. I was very happy when we moved to Bangalore.
Now my daughter lives there, and although after living in Bangalore all your life moving to Bombay is not so good. It takes her hours to reach her office, and reach back home.She is otherwise very happy, but the city really gets you down.
But I also know of die hard Mumbaikars who will never leave that place.
I was just blog hopping when I came across your blog.
It was good, and the pictures too were good.