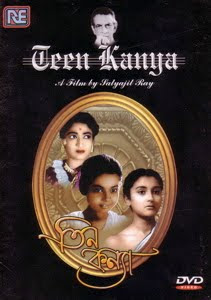 Tagore's short story "The Postmaster" is ostensibly a simple story - that of a young man Nandalal, whose comfortable life in the lap of his family in is disrupted by a transfer to a village post office . As expected , nothing measures up to his expectations - the job, the immediate environment and most important the people . He fails to appreciate the beauty of rural , he pines for home and family . Having nothing in common with the villagers ,the only ray of weak sunshine is the general factotum of his one man household - the orphan child Ratan , who cooks ,cleans and nurses him through a bout of malaria . He teaches the girl to teach , chats with her about his family and in the process livens up his life and offers a ray of hope to Ratan who , bereft of any love dreams of becoming a part of his family .Ratan's little tryst with hope and happiness is shattered when Nandalal gets a transfer back to the city and as compensation to Ratan, without an inkling of the fantastic dreams she has conjured up of becoming a part of his household at Calcutta , offers her a generous tip which she is too proud to accept . A simple story , no doubt, ordinary even but lifted to a level of excellence in characterisation and situational narrative that could only come from Tagore .

The film by Satyajit Ray stars Anil Chatterjee as the whining , complaining postmaster Nandalal who cannot reconcile himself to his new environment and Chandana Banerjee as the orphan girl Ratan. The camera almost caresses the serene beauty of rural . Ray who had a magic touch with child actors ( think Apu-Durga in Pather Panchali,Apu's son in Apur Sansar and the little boys in the Feluda films ) extracts a stellar performance from Ratan who conveys more with her expressive eyes than through dialogue . When the postmaster , ecstatic with joy at his transfer forgets all promises made to the child during their long evenings together , there is a proud and quiet dignity in her moment of epiphany when she realises that people do not mean what they promise on impulse and so she withdraws into herself , treating the tip he gives her with the scorn his action deserves -that money is not the alternative to what she craves - a sense of belongingness , security and a family to call her own .

Ray's treatment of Manihara is pure Gothic . The film opens with the village schoolmaster crossing the ruins and gardens of a house to the ghat on the river which lies beyond , carrying with him his opium pipe and a manuscript . On the steps of the ghat he meets a man draped in a shawl sitting on a lower step, strikes a conversation with him and narrates the story of the people who had lived in the house beyond . The young man is played by Kali Banerjee and his wife by Kanika Majumdar

We meet Manimala's feet first , shod in elegant velvet slippers and then we see her almost ethereally beautiful face and the exquiste muslin sari she wears . Phanibhushan is besotted with her beauty and would like to claim her entire being but she eludes him . Besotted by her lust for jewels and terrified that her husband would use them to save himself from financial ruin , she plans to go to her paternal house with her jewellery and recruits her rascally distant relative and ex lover , played in a brilliant cameo by the young Kumar Roy , to take her there . For a moment she hesitates because her husband has promised her jewels on his return , if he is successful but the survival of her jewels is uppermost and flinging her keys on the bed she departs .She never returns - except as a wraith , trying twice to enter and failing and finally succeeding on a full moon light , drawn by the promise of the jewellery

Besides being a ghost story , Manihara deals on different levels with power , pride, possessions, lust , craving and dissatisfaction and a deep sorrow .A sense of impermanence pervades the film , the river a metaphor for change and havoc in the lives of the couple .

The subtle play of light and shadows , the sound of footsteps , the gathering dusk, the art deco artefacts in the room over which the camera pans , the sudden rush of sunlight as the camera rushes to the window as if choked by the darkness and impending disaster which the room invokes , moonlit night and throughout the film the strains of the song “Baajey Karuno shurey “ interspersed with the haunting cry of the curlews creates an eerie , evocative atmosphere and brings out the gothic component very forcefully .

Kanika Majumdar’s Manimala is distant -her eyes are constantly searching ,her head cocked to one side as if she is listening to a distant song or a voice within herself . She is brittle and delicate and treading the tenuous line between sanity and insanity .Her eyes glitter with a febrile intensity as she runs her hands through her jewels and adorns herself with them before preparing to run away - the balance having titlted towards insanity and portrayed so effectively . The jewels her husband plies her with and which she guards fiercely are a substitute for a deeper craving- perhaps to experience love in its fullest form and not just as a plaything , perhaps for a child .

In the short space of about an hour we are caught up by brilliant performances and tremendous cinematography - almost a distillation of a larger canvas done in miniature .

In a sense Samapti or The Ending is the lightest in texture and mood and peppered with a great deal of humour . The story of a girl’s transition from unmarried bliss to marriage – a story of coming of age – the confusions , the ensuing hilarity , perception of mockery of the institution of marriage are played out consummately by Soumtira Chatterji and a very young Aparna Sen who transcends the boundaries of a tall gangling teenager to a woman who realizes what marriage , affinity and love could mean . Ray’s superb touches are there in the scene where Mrinmoyee discards her wedding bed , socal norms and shackles to run away and play on her swing in the moonlight , each upward propelling motion of the swing , reflecting itself in the sheer joy of living that only freedom can gift , the puzzled expressions on the girl’s face when she cannot decipher what she is required to do as a married woman – a set of rules , customs and bindings which have no meaning and the moment of realization when she perceives that she loves the man she is married to .

In a sense Samapti is an ending to the freedom of childhood , and stepping towards adultoohd and maturity .

Tagore’s sensitivity and his exploration of the feminine mystique and psyche were far beyond his times . Ray has captured each nuance of his sensitivity and translated them on to celluloid with such consummate mastery that even if one were one not to read Tagore in the original , it would be a stepping stone to understanding this Renaissance man .

Yes, Tagore was really a feminist. I read 'Charulata' a while back and I was amazed at his portrayal of the women in the story. I do wish I could get to read these three stories, especially Samapti, in English.

you blogged????? :-)))))))))
this is me grinning ear to ear. welcome back, EL!
Missed you.
Agree with hillgrandmom, are these stories available in english?

Hi Susan / Suku - after a long hiatus I agree ! There are a lot of translations available - I dont know about these 3 though - can find out :)

Me too Mallika. I too would want a translation of these stories. Hindi translation would also be okay.Please check if they can be ordered online.

After waiting months for your next update, I never got around to reading when you finally did post!
This is beautiful. What a tribute. I've only seen Samapti (though I've read Postmaster). Must remedy that asap :)

hi, so good to see you back again. lovely post, well analysed.

i have seen the translations of these books at Reliance Timeout at bangalore. at kolkata, Landmark usually keeps many translations.

also these three movies (in a a set)come with english subtitles.

looking forward to more from you M.

Watched Manihara at last - thanks to you. Really really well made, especially the camera angles - specially when it looks in on the couple from outside the window, past the net curtains :) Loved your review - attentive to detail, insightful, and bang on! And also loved the pun in the film title. Though "pun" trivialises the depth of meaning in the title.

Evie, I spent all of Monihara gawking at the sarees. Even in black and white it is impossible to miss the gossamer weave. It helped me cope with the fright I got at the end of the movie. :)

I have been sitting on this movie for a while. I'd read and loved your review much earlier, but never got round to commenting upon it. Yes, Tagore's understanding of the feminine psyche is simply wonderful. Will watch the movie and give you my response to it!

Hi ! Found this blog by chance !
Can you please get in touch with me at thebrowsingcorner.tbc@gmail.com ?

The Browsing Corner is an e zine we started in September, this year. I just read your book review for Satyajit Ray's book .

Maybe we can publish that at the e zine...