We spent the evenings of that hot , dry summer ,lounging on the steps of the house – long and running the length of the house and leading up to a wide deep verandah and the rooms beyond and then the back verandah looking out on the courtyard with a clean cowshed in one corner and the kitchens next to that . Not quite pertaining to hygiene standards but large and airy and a happy house so Ruby was quite willing to forgive the stray cow on the premises now and then . Of course when the cows gave birth the doors and windows were shut tight and my grandmother was on guard .

Bui , D and I – all three either lazing on the steps or stealing guavas from the house behind on the back lane where I was allowed to go only when D was there because she was so adult and assured and superior , although only a measly 5 years older , Bui , pretty with long curly hair and flirty eyes even then, lived in the great round house at the head of the road with the big white gates .

In the long drawing room with French windows overlooking the lawn , in Bui’s house we would play Cliff Richard ‘s Bachelor Boy and No 64 over and over and over again on their new record changer till her mother screamed at us . The louvred shutters used to be half closed and the sun slanted in through the slits . The floor was cool red cement and we lay around on it , Bui and D comparing notes on music while I lay on my back and watched the dust motes spiraling slowly on the shafts of sunlight . The air was dry and heavy with the smell of mangoes from the two trees which flanked the front gate . Cliff Richards warbled loud and clear all that afternoon .We came to life only when the Kwality ice cream man came on his cycle tinkling his bell and we piled onto the road outside for vanilla ice cream in thick waxy blue and white striped cups .

Sometime at that exact moment in the evening , looking down the road straight towards the foothills of the Dalma range , now a purplish green in the distance , we could see the dust storm rolling towards the town which meant a mad scramble down the road to our house . After the aandhi, there would be a light spatter of rain and then Baba would come home in Old Trusty , but D ’s and our routine would remain unchanged for we would continue lazing evening , the steps and verandah dark except where the table lamps in the drawing room spilled pools of light which floated outside and Nilu who stayed upstairs would play “Bachelor Boy”, doing the twist in fancy straight legged pants .

Bui announced in hushed tones one day that her aunt was coming to stay in the small two roomed cottage in the garden with her three daughters , her husband an officer in the Army having perished , fighting for his country .

When they came I sort of adopted M -thin, brown , gap toothed and quite ugly next to her brilliantly beautiful older sisters. She went with me to school and spent all her time in my house while Bui raged with jealousy . .. I have a memory of her older sister in white capris and a pink and white striped sailor shirt , standing with her bike, basket laden with gulmohur blossoms , talking with a boy on the deserted Straight Mile road. She looked so beautiful that even after all these years I can still see her clearly.M became my closest ally as she was closer to me in age. Eating lunch together, coming back home from school through the cemetery , where the grass was knee high and the graves untended – chasing each other down the road leading to our house while Lata struggled behind with our bags , gleefully pouncing on the new Phantom comic which had a six page section on the Travels of Marco Polo in Gothic script so that T looked like a lavish A and I puzzled over what “Aravles “meant and then on to the adventures of Phantom where again the line “ For those who came in late ….” bothered me immensely.

In that wonderful world, school too was exciting – a massive pale yellow building and a grotto with a statue of the Virgin Mary and the dark hushed chapel and a huge lawn where we had the annual day and I danced with a broom and sang something . 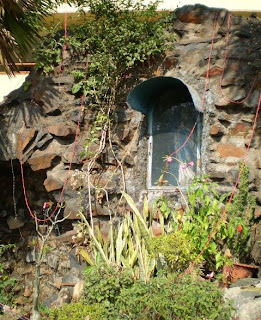 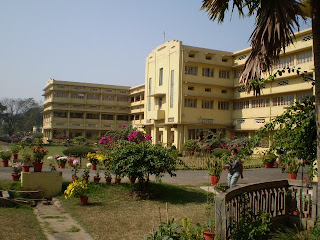 In December this year ,I went back after years – looking for my childhood – strangely enough I was not haunted by my memories of an older Ruma – the little one plagued me . The one with skinny knees and secret games, of afternoons spent in poring over the Arthur Mee’s Children’s Encyclopedia , going to pick up my grandmother from the station- rummaging in her little wicker baskets which had tins with Karachi Halwa written on it and lacto bon bons inside – cuddling up to her for stories about her childhood in her father’s house in North Kolkata where they sacrificed a bull on Ashtami every Puja and the cobra that hung over my uncle’s cot- it's hood open and swinging – of time spent alone and with M and with Bui and DD and the relentless voice with a catch in it singing Bachelor Boy .. of stealing malpua from the little meatsafe before the fridge came and getting caught in the act , trips to Dimna and the Jubilee Park where the statue of Jamshedji Tata loomed dark and high and the fountains played red , blue and green and magical and Ma chasing me around the aalna with a wooden ruler because I had done some mischief or the other and the skinny little ragbag of a baby sister who suddenly arrived one winter .

I could see myself in every lane that I had traveled when I was a child. Time had stood absolutely still in most places , even to the tree on the corner which had cast such frightening shadows on the bedroom wall and going to the school was like I had never left at all , so much so that I was in tears . But the house we lived in looked haunted , the garden which my mother had tended was in ruins , a guava tree snapped in two . The bottle brush which shaded the verandah and attracted hummingbirds , squirrels and chameleons was gone .The mango tree however had survived and stood tall and straight completely shading the eastern side of the house . 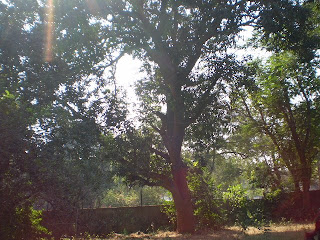 Sometimes its not a good idea to go back looking for one’s childhood , but having done this trip has laid a lot of ghosts to rest .

Lyrical. Sounds like a wonderful carefree childhood. But yes, it's hard to go back and realize that although everything's familiar, nothing's the same...

Beautiful memories and perfectly written. I could almost feel in the drawing room having a look at the french windows. I loved your descriptions.

Heh. Going back every week to the house where my childhood effectively was helps me so effectively that the new images overlay all my old ones. Which is probably just as well, since remembering could, quite possibly, hurt more than soothe.

Some of those activities remind me of the kinds of lazy summers I spent as a child of the south...but your house seems larger and grander than our blue collar family.

Going back is always such a mixture of emotions.

Yes, lovely descriptions. I remember very well too the summers spent at my grandmother's house. I went back some years ago; the house was still lived in and cared for but I still felt sad because she was not there to share it with me (She died when I was 8 but we were perhaps closer than most grandchild/mother relationships and the memories have always been strong)Is it something about that period in your life? My mother recently sold our family home (over 40 years there) and its loss did not have so great an impact; maybe that's because I could see the reason and logic behind it and when we're young we haven't yet developed those, so the emotional response is more pure... in my case the loss of my grandmother was probably the most significant event of my childhood.
Ah memories....

@ Muser- That part of my childhood was the best time. Its such an intrinsic part of my life .
@La delirante - Thanks :)
@Rimi - I agree . But then this permanence is a boon .
@Shaapla - Jamshedpur in the 60s
@Dipali - Yes but for me its more than nostalgia - I cant describe waht exactly it is - all my references are gone -that makes me feel so hollow inside at times , nobody to share those memories with
@Onedia - it was a rented house with a huge bank of steps !
@Roop - welcome Roop and thanks -
@Oh Jane - exactly my sentiments

Jamshedpur- yes I see that. Reminded me of Ranchi, where my parents were while I was in college. Your post brought back the scents of Bihar, the dust, the mangoes, ripe guavas,the scent of dust after a shower and the memory of big purple jamuns.
beautiful post Eve.

well said!I too went back to my school two years back and it was wonderful walking up those wooden steps leading to our dormitory.I touched the bed that I slept on and opened the cupboard that belonged to me.Can relate to your post.

Porte porte mone hochilo chole jai tomar chelebelar jamshedpur e. Have not been there but always wanted to join TISCO just so that I could live there :) Have friends from REC (now NIT), jamshedpur too but of course their memories are nowhere as sweet as yours.

Well life had other plans and so I am here

This is a beautiful reminiscence, but you should have broken it up into two posts.
The style itself is a memory. I've written in the same yearning tone myself, but I can't recall where I first came across it.

@ HG - Ranchi , Jamshedpur -very close in terms of proximity but worlds apart.
@HHG - Part of the fun was meeting you:)
@Sandeepa -Very expensive to maintain , both - !
@ JAP - I realised in hindsight that I could have broken it up into 2 parts .
@ph - Thank you :)

Goosebumps. I wish this had been a novel - would have loved to read more.

TC - you'll live a hundred years .It is a prologue to a novel :)