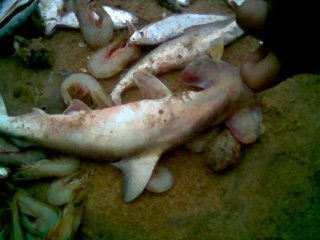 A baby hammerhead (?) shark caught in the fisherman's net 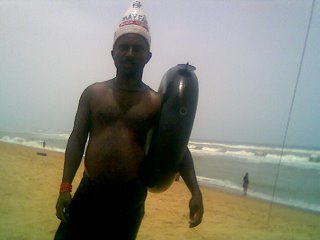 Narain the Nulia at Mayfair . He's a poppet , calls both the girls Mamun and me , Ma. He always has a gift for both the girls but is known to favour Tani more . Also a hard taskmaster who takes you much deeper into the sea for a good swim , than most other nulias .Much preferred to the mentally deficient Ramu who is known to let go and dive after a posse of parshey fish under water . 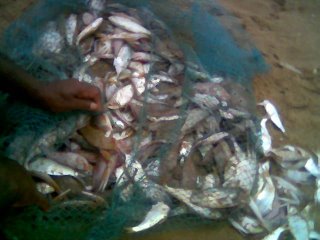 Fruits de la mer - a catch of shiny sparkling fish - parshey , prawns , bata all bought and made up into chorchori , jhaal and malai curry .

This was the Dragon prince which clambered out of the foliage in the verandah and posed most obligingly for me .


In the summer of 2006 we took our annual trip to Puri . Puri has become an annual habit with us . On the short drive from the station to the hotel we watch out for changes and there are many this year .. new hotels have sprung up , white and gleaming and hard on the eyes in the blinding sunshine , having taken the place of mellow ochre and mossy walled old bungalows with romantic old world names like "Sea View " and "Sundance" - but whimsical echoes of the thirties, forties or even older ..

The Chandan Hajury Hospital for children , once a huge haunted house , now has a granite facade ..no ghosts of little children could stay in such sanitary surroundings because there wouldnt be any nooks and crannies .

However some things that we look for each year that still remain the same :-

The girls say its like going to Santiniketan. Like Coming Home .Everyone greets us and asks how the year was . They all exclaim about how big the girls have grown . They all say how nice it is to see us once again . We like it very much .

But alas .... for the eatery called Mickey's (?) Bar , which once had a huge Mickey Mouse cartoon drawn on the wall and where you could get red mullet and snapper and shark steak ...and also small doses of the powder that makes for happiness, is now a "Marwari basa "serving strict vegetarian food ...but comfort comes in the fo.rm of the Honey Bee cafe which serves delicious pizza ,cappucino and bread among other edibles.....

This is very good, though I don't much like Puri myself. I shall refer to this guide if I go there again (spousal pressure, she loves it)

You said it , not me .You said its just like the times we went to Santiniketan ... dont fib

Never been to Puri. But your post makes it sound like a really ladi-back holiday destination--a must-visit place :)

@JAP - you need to see Puri thru mine and AG's eyes, to like it and you can definitely take our advice before taking that weekend trip to Puri . Oh does yr wife blog ?

@ Sue - Okay in small doses and provided you stay far away from the madding crowd!

wow things change... I can't remember any of this.... I have been visiting every year since I was 8 or something... always used to stay at OTDC... went to the temple to watch the monkeys.. emt up with the same nulias and the same pandas and that same mishti shop which sold gajas...("Puri Sweets")...

but ofcourse I havent been back for some 5 years now... maybe 6... and nothing seems familiar... except BNR.. and Mayfair (one day I swore I would be able to afford a night there)... but none of the other stuff you say rings a bell