Every family has its share of lunatics .. mine seems to have more than a fair share. When my maternal grandmother , Shanti Debi , tall, dark and beautiful and long dead, without having seen her family flower to life , gave birth to her first born , a daughter , her mother in law ,the diminutive but steely Gnyanadasundari Debi , took the errant couple , the two year old child and an army of servants , first to Puri and then to Benaras . In Puri they rented a house on the beach , like all good Bengali families of yore and then she took Shanti , my grandmother to the temple , where she had to measure her length from the gates to the sanctum sanctorum ,in the sorching heat of the sun , not an easy feat .

But she did it because the good Gnyanadasundari ,who ruled her household and her son Kali Charan Ghosh with an iron hand ( without any velvet gloves ) was full of righteous Hindu morality and believed that this was the only way that a grandson could be assured , since it was ent 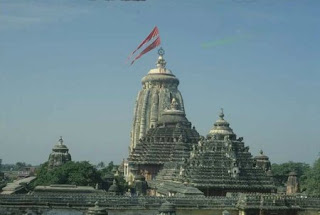 
Last week standing before the second gate to the Jagannath Temple on the Singha Dwaar side , I looked back and wondered how long it had taken Shanti to clear the first lot of steps before proceeding maybe from the left side which is a shorter route , or the right side which appears to take slightly longer and then up another flight of high steps and onto the black polished stone ofthe temple which might have felt cooler to her hot body . I like to think of G Debi marching alongside with the light nimble steps that frail old women often have , cheering her on her way and little Karuna yelling her head off, contrary even at that age . I cannot imagine what my weak willed grandfather did .
Eventually , after the same torment in Benaras and after her body had healed , she had a son ,a good looking , happy boy who unfortunately predeceased his parents and his grandmother at the age of 18 .

No good ever came out of G Debi's advice but her son took it nevertheless , eventually losing his money and the house with the stained glass doors in Bhowanipore and the prancing lions overhead, in the lane next to the park ,at one go ,as the result of a bad investment on the advise of his mother and creating a decade of death and disaster for his family .

No one else took her advice and the strong base of religious fervour and dogma with which she enveloped her family ,died out with her because the girls grew up to be raging atheists with not a single picture of an idol between them.

Passing the TB Hospital in Jadavpur and going to Orissa reminds me strongly of my grandmother since she spent a lot of time at the hospital and was then sent to Puri -and the wistful letters she wrote to her first born Karuna ,entrusting her and not her husband , with the rest of the surviving family because she felt her end was near .

Kalicharan also died a few years later in Dalhousie Square and Ruby , then 16 , had to go to the morgue on her own to identify the body and bring it back , because Karuna was in prison , having hoisted the tricolour on the gates of her college , the Govt College of Art in Calcutta .

The letters were discovered wrapped in blue ribbon , in the recesses of the safe of Karuna's cupboard just after her death, by her horrified daughter who had no inkling about Shanti's illness or the subsequent horrors the family faced later.

My mother Ruby was the child of her soul and she mourns constantly for her in her letters , written from her hospital bed, the sands of Puri , lying back and looking up at the stars and savouring the peace and solitude while worrying not about the other four , but about Ruby - who was gentle , kind ,sweet and trusting with very little fire - and agonising about the little time left to them .

She would have been happy had she met my father Mukul- a giant of a man with a mammoth sense of humour , a taste for good food , good music and good books and innumerable friends - who loved Ruby to bits and was lost without her and who wrapped her up in so much love and security and tenderness that the greater part of her spirit and self died with him.

Such a lovely way you have of narrating these stories. I think a longer piece would do your writing more justice.

this was beautiful, specially the way you ended the piece.