A negotiable price and conversations with God

Early morning at the Jagannatha Temple in Puri ,perched on the edge of a tank , 12'by 6' and about 4' high , a man in a cream dhoti and sacred thread , a tuft of hair pulled back in a knot at the back of his head , playing God . He dispenses favours with a practised ease to the gullible and the simple . Four South Indian couples , freshly bathed – the women in gorgeous silk saris and flowers in their hair and the men in intricate bordered lungis perhaps easily believe that the hood perched there is God’s advocate who can grant their boons whether it is to bestow a long wedded life with haldi kumkum intact all the way to the pyre , a long life or a son.

Accompanying them is a temple tout who speaks their language and acts as a translator.

The panda invokes the Lord's blessings and intercedes with Him for a son, for the expectant young couple before him. A pause and then he dips a receptacle into the pool where lotuses , dead flowers and leaves of tulsi and bel float and gives it to them to drink He then proclaims that they will indeed have a son. Next he stretches his palm and demands Rs 151/-.

The young man turns out to be quite canny. It appears that an intercession with the Almighty for a son is negotiable . He gives him Rs 71. This triggers off an angry remonstration from the hood but the young man will not budge from his stand . The woman is disturbed - the panda now suitably agitated is sitting on his haunches on the edge of the tank.

Enter the tout who negotiates skilfully asking the man to hand out another fiver . Bending to the tearful persuasion of the woman, the young man hands out a fiver .The tout realising he is bested by this valiant Son of Andhra asks the panda to drop the matter .

"Tchah!" says the panda and goes back to his invocations with the next couple , promising them a son too .The couple look askance at him - the man around 75 , the woman touching sixty five . No No they yell - Oh ok ' the hood says and changes it to the long life mantra for the man and infinite haldi kumkum spiel for the woman without batting an eyelid, still smarting from his early morning fiscal loss .

Later in the day a crowd of pilgrims appeared on the beach .The crowd straggles to a halt near the sun shelters under which we sit , the women carrying the odds and ends of luggage , the men barking orders . Ultimately the women settle down on the beach in a colourful heap and the men sit down a fair distance away . 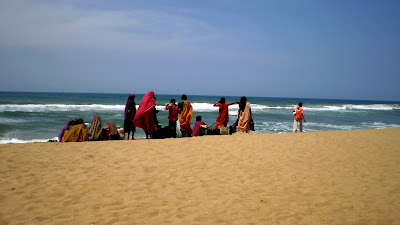 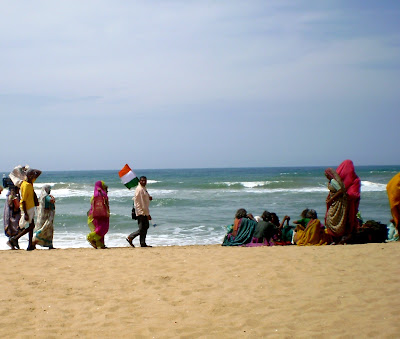 Minutes later , another group appears farther down the beach , carrying another tricolour . 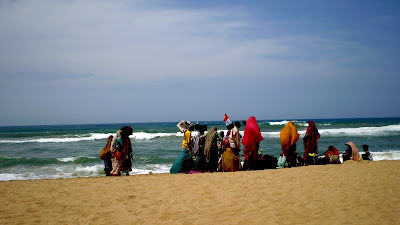 My mind is fogged with sun and sleep . Tani explains that’s how they communicate from a distance – a sort of flag morse maybe ,

Sad to think what easy meat they would be at the temple the next day .

But it is a beautiful place 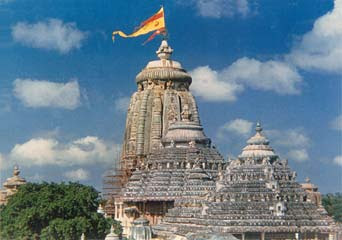 - the floors of the sanctum are buffed to a soft black sheen, intricate carvings crawl up the facade of the temple , at dawn Lord Jagannath is woken from his sleep to the sound of drums and cymbals , the chanting of mantras and a great hallelujah of hymns, The sanctum is plunged into darkness, lit only by the brilliance of a myriad of oil lamps during the mangal aarti to ease him into daylight

In the evenings a brisk breeze cools the courtyard - there is activity everywhere , whether it is the supple athleticism of the young man climbing to the pinnacle of the temple to tie a pennant ,or the group of bank employees who gather to sing impassioned kirtans in a part of the temple courtyard , the acolytes in saffron and cream dhotis and sacred threads , some with tonsured heads and some with small knots of hair at the back of their heads , sacred scripts in hand , an anachronism in the outside world , but so real inside the temple and its immediate environs as to be surreal , the widows lined up on one side, old and bent in dirty white saris , each sadder than the one before .

It is strange to think that in the midst of the rituals of worship from dawn till the doors of the sanctum are closed and the thousands of devotees who throng the temple each day, seeking peace, salvation, riches , good health , in the end it is really a commercial establishment with each activity meeting some established fiscal target

Nice post - I used to hate the pandas at the temple. And why is it that people still pray for sons?

I've never been to Puri (maybe the only Bengali who hasn't), but I hated the commercialisation of religion at Benaras and Gaya. But i guess the sea makes up for that. Interesting food, too.

Funny and tragic at the same time dear namesake. When my sister was briefly engaged last year, some purohit swung promised my mother lots of grandchildren and ran off with £5,000. Desperation is a big fiscal opportunity...

EL - i hate commercialization of places of worship!! i am sure we dont need middlemen to reach god!

and if god was someone who took money and granted wishes, how different is he/she from corrupt babus!

my interest in temples if any is now purely architectural!!

id rather have my one on one whenever it suits us both!

I was reading ur blog posts and found some of them to be wow.. u write well.. Why don't you popularize it more.. ur posts on ur blog ‘Eve's Lungs’ took my particular attention as some of them are interesting topics of mine too;

BTW I help out some ex-IIMA guys who with another batch mate run www.rambhai.com where you can post links to your most loved blog-posts. Rambhai was the chaiwala at IIMA and it is a site where users can themselves share links to blog posts etc and other can find and vote on them. The best make it to the homepage!

This way you can reach out to rambhai readers some of whom could become your ardent fans.. who knows.. :)

As usual, a perfectly written post. I try to stay away from all those gurus who manipulate people's minds and get their money in return. They annoy me incredibly.

Loved the pictures too.