An eventful 30 days or so . Srin has flown the coop to study in Delhi - it has been hard letting go of her because she is a wonderful daughter and companion, but sometime,somewhere , one has to cut the umbilical cord and this was as good a time as any . It reminded me of another time , another place when I crossed the country in the opposite direction from Lucknow to Santiniketan - not that I was a totally willing participant in that exercise .

The week we left her behind was a totally girls' week in Delhi spent in taking in the sights for Tani's benefit, spending time in the souks (!) and the restaurants fot all our benefit . The Big Chill Cafe at Khan Market was a big hit ,Veda, Moets , Moti Mahal , were all tried and tested but yes we did go back to The Big Chill , the most . The pastas, grills , frozen yogurt, baked potato and cheesecakes were to die for. The bread at the cafe was great but the foccaccia at Moet's was scrumptious - soft and stuffed with herbs served with a delicious tapenade, oozing green olive oil,just thatright bit of tart,astringent taste .

We bought kurtas in Anokhi , saris at Utsav,bags, Oshos, skirts in Janpath, book at Bahrisons - I hadn't been to a standalone bookshop in ages and enjoyed browsing in all those corner bookstores that populate all the Delhi markets .

The sights of course were marvellous and as I explained to a very literal Tani , just being in the now sanitised ruins of the Purana Quila , one could , if one took a deep breath , smell the sweat and rancid animal smell of the invading hordes , the skins that they flung around their shoulders, the blood and gore that ran in the streets of Delhi , the smoking swords , their arrogant self aggrandizement manifested in the monuments that they built .

Of course Tani being Tani , bless her , said "Ma that's history", but that did not stop her from looking fearfully over her shoulder in one of the mausoleums in the Humayun's tomb complex.

It rained when we left Srin at her hostel so much so that I couldn't see the room she moved into. There is an empty space in the house , a little less clutter ,there are the phone calls that help us to keep in touch , so removed from the waiting for letters and a mad scramble to see what the post had brought - news sometimes sanitised and controlled to spare that one person so far away.

But there is a gateway and through that gateway is a lot of light and hope and a prayer for a bright future which is up for grabs ... 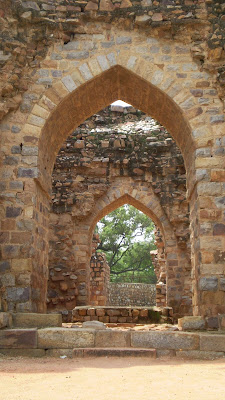 Email ThisBlogThis!Share to TwitterShare to FacebookShare to Pinterest
Labels: children

I also went thru this empty nest syndrome. Initially i felt very lonely, and since my daughter used to be a very good assistant for me, for months i cudnt find anything in the house.
But slowly life came to a pattern. children once out, , first for studies, then jobs, then marriage are nevr back in the same way.

So nice to read such a positive piece. And, you went to Big Chill. MY HAUNT. Am sure Srin will settle in and make a variety of great friends soon. All the best.

You are such a cool mom - not many would take letting go of their children in such a positive light.

The upside is, she'll do very, very well. Become very very rich and buy you lots of presents! Besto to her!

Soon I will go through the same thing :(
A friend once said why do we let them go so far away...but we can't hold tie them to our apron strings forever! They must learn to survive on their own. And of course we keep in touch, this is one new stage in life :)

i agree with Mystic.. you are one cool Ma.. hugs,Mashi

I live in fear of the day when I'll have to do the same thing. Do they still let you cuddle them when you say Goodbye?

@Renu - yes they become guests ..sigh
@TC - I did like Big Chill - could become a favourite haunt of mine I guess . She likes the place.
@ MM - Doesnt look like I had much of a choice so making the most of it!
@ Iz- darling,Im keeping my fingers and tootsies crossed!
@HG - Hugs right back :)
@IHM - It builds character I think, staying alone and makes children more responsible.I agree
@ Trish - Thanks .
@ JAP - Sir,not much they don't.They're rather condecending at that age,sigh. Thanks - I've got some more which I'll put upon fb.

Such a lovely post. Good old Saaddi Dilli. I'm sure that Srin will love Delhi and enjoy her course.
The Big Chill has been a favourite hangout of ours, too:)

oh well you always have the brat and bean to hug when you come here. and Srin knows where to come for ghar ka khaana when big chill bores her (who am i kidding - how can one bore of big chill?!)

Ps.. I'm on a diet, please try not to mention cheesecake again will you?

@Dipali - some things can be so addictive. Regarding fledgelings taking wing I draw inspiration from rational you!
@MM - Thanks -you made my day with that hug offer:)Srin will cross your door I'm sure once she tires off bahar ka khana!
@ Mrs T - You could always try the fat free frozen yogurt !

I can understand but it hurts all the same.with 4 grandchildren to cheer my heart I shamelessly wish my children had never grown up and were as trusting and dependent on me as in their pre-teens and teens.The thought that you need them more than they need you is difficult to accept.Our best wishes to srin for a great future.

you just let go of a child and when she comes back for her next holidays you are going to have a friend. My best wishes to Srin.
An award awaits you at mine.

it must be a proud moment!! here's to new beginning for Srin! :)

ps: all that food talk made me want to ruun to delhi!! :(

I wish I had had such a close and wonderful relationship with my mother when I was younger :( I think I would have loved it.

I agree with "thinking cramps", it is nice to read such a positive post :)

So this also means you'll be coming to delhi more frequently and I'll get to see you!

Awww, you did good! Looking back I don't know how my parents handled my leaving for the US for further studies so well. My mom, the usually emotional one, was ready to let go; it was my usually calm and collected dad who said at the airport, "There's still time, we can cancel the ticket..." I hope when the time comes I can handle the empty nest with as much grace as my parents and you...

@ Muser - I think I could do it easily because I left home to study . Of course I miss her and the phone helps:)

I miss Srin too! Hope she plans to come back to Cal eventually.

I remember when I had to let my sister go. She moved to the States. And well, life has never been the same. But you get used to it.

Reading it again when my daughter has also gone to study in Delhi!! It had seemed very far away then!!!

Loved reading it again... we too shopped endlessly (including at Khan Market) and we too are in touch with cellphone and the internet... Amazing how fast time flew!!