I thought we would spend last evening quietly at home with a glass of Sula blanc and the TV shows but we wound up on the 6 th floor terrace of a friend's house . The barbecued chicken was warm off the skewer , there was wine, South City mall painted the sky with colours from the rooftop and at night it seemed as if the whole city had let off fireworks - for all the world like showers of precious stones in a crystalline shimmer of cascading colour . I think we all heaved a sigh of relief that the year was behind us. It is a little special because of this little mite , BRG's great grand daughter , who was born last month . 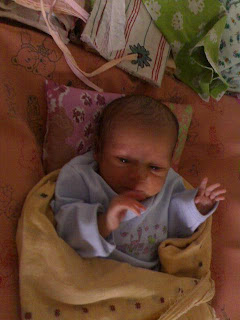 We were not the only ones celebrating . The household help also vamoosed , with the cook shunting off in the afternoon to celebrate her sister's birthday and see the new year in ( she's very posh that way ). The part timer Maharani , whose connubial bliss has us fuming at times , had an appointment with her husband to go the zoo and we are all hoping they had a good time and did not lose their way .


This year I have no New Year resolutions and I am not surprised to see that Usha of Ageless Bonding shares my reluctance towards making New Year resolutions . At my age you suddenly realise that the list of nonsense one makes faithfully every year and never abides by is of no use at all because somewhere in the welter of everyday living they get lost while you attend to things which assume more importance.

Most new year messages this year have the "safe" element packed into them - like a crossed finger syndrome where you hope against hope that the extremists pack up their genocide agenda. But of course that is a futile hope as the Assam blasts today will prove.

However , I am hoping that together with all the wishes for ,love,safe etc , someone could actually wish away all reality shows on TV including those where prepubescent children participate , music reality shows , which now, make me want to barf ,cookery shows where the anchor does things that you and I can never hope to achieve - of course I would not wish to cook like Nigella Lawson( she's so over the top with the loads of butter and cream she uses and the lusty way she lunges at food , with a sidelong arch ,coy glance at the camera ) but I wouldn't mind doing a Kylie Kwong ( she looks like my friend Snigdha Patnaik from school and overall, appears very restrained ) ;programmes like Big Boss and Splitsvilla which you run down but secretly watch . But then again I am at that age where I am not so secretly pining for the good old days of Doordarshan- back then of course ,I'd wish there were more channels .

However , this year I hope to become a baking goddess and am working towards it steadily and slowly - I also hope to move away from the book club towards the bake club and aim towards using my persuasive powers in this direction. I am also thinking that it will not be much of a loss because the book club is now practically defunct and peoples' attentions are wandering .However, this will not detract me from reading at all .

2008 has passed by very fast ,almost in a blur of days and events compressed like a closed concertina , threatening to spew loud , discordant music when opened . But all said and done , like my sister , I prefer to view Jan 1 as the day after Dec 31st, no more, no less.

So let us raise a toast for a better life in the next one year and good health and happiness for all our loved ones .

Happy New Year. I wish you happy and good fortune in this year.

Happy New Year!!
I never make resolutions but this year I am taking baby steps towards it.
I did see one resolution though- the baking club one!! Its a good one too.

Wishing you a fantastic New Year Eves Lungs. Hoping to see more gems and baked goodies from you in the next year

A baking goddess Mrs G?! I wish you well - and if you develop any tips for producing a four course meal in less than 15 mins please let me know!

Best wishes for the new anyway Mrs G and many thanks for all your friendship throughout 2008. 2009 isn't looking that great with the global economic crisis but let's hope it turns out much better than expected. Fingers crossed.

Btw where do you dream up some of your descriptions;

@all - a happy new year . Lik emost fads I'm sure mine will die out fast for some reason or other , but I'm enjoying it while it lasts and time permits .
Sandeepa - Lovely to have you back !
Jane -fingers crossed , indeedy.And thanks for your friendship too :)Thanks for the compliment re the remark

Congratulations. And is this little baby born to the lonely young woman you blogged about some time back?

Hey Mallika, the Sula blanc and quiet evening was just what we did :)and then I sat at the comp till 2.30 a.m.!!

And wishing you a great year in which to become thebaking goddess.
I totally agree with Mrs. T about your turn of phrase--totally amazing!

@TC- yes she is - she has the most adorable green eyes .
@Susan - aha yes I remember your telling me that !

and Happy New Year to you EL.

hope this year brings everything you wish for!

and baking goddess? wow! the day i can make chapati like my mom, i will die a happy woman! baking is so not in the picture! :p

have fun whateva you do!

I have also given up with New Year resolutions hehehe. I have realised that they are usually the same year after year after year which in a way it's not bad because they should be a constant...at least some of them such as having a healthier diet or doing exercise for instance. The key is trying to keep up with them year after year :)

A very Happy New Year to you Eve's Lungs :)
I have made a new year resolution this year, to be a little more disciplined & organised ....

My household help also told me they had to go and see the 'New Year Eve' so they will be late next morning, which was great because it gave me peaceful New Year morning :)

EL, I think I've reached an age when I acknowledge that it's more fun breaking resolutions than making them. So there's the point of the exercise! The resolutions I plan to break this year: giving up on chocolate, flossing every single night come what may and ogling Anthony Bourdain on TV.