Of Old Houses and Ma Durga 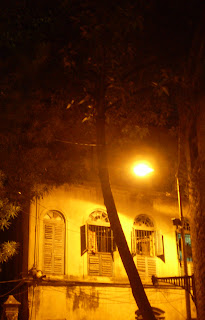 My grandmother's father's house was in Baghbazar - in the lane opposite Girish Ghosh's house in Bosepara lane. When I was a child , Sunday mornings meant snuggling up to my Thakuma and listen to her stories of Durga Puja in her father's house , where a bull used to be sacrificed , the beam in the aatur ghor or the maternity room , where a cobra swung itself down , poised over the cot where the infant Bulbul , my eldest uncle lay , the house opposite, where Sister Nivedita used to stay , the gardens full of fragrant flowers which the acolytes used to pluck for the mornings devtions . In a corner of the garden they threw the flowers from the evening worship which my aunt Mili used to want to pick up - because they were still fresh and smelt beautiful. This year my cousin came - she was full of stories gleaned from her mother and remembrances of stories Thakuma had told her and we went in search of the house .

We had no clues except the name and repetitions of that name were pleanty , matching with my grandmother's maiden name - and we were trapped - in the narrow alleys , houses marched tall and old, huge Follies , with the stray apartment house thrown in . Time actually stood still here , talking incessantly of a time gone by .

An open door led into a paved courtyard with verandahs lining it, 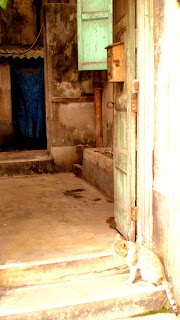 the spire of a temple rose , where the lane turned into another -

Such follies they built in the olden days -a house with the most intricate wrought iron verandahs and lead paned gothic windows and across the lane - hugely majestic; 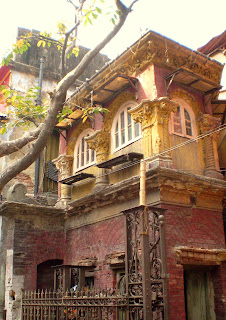 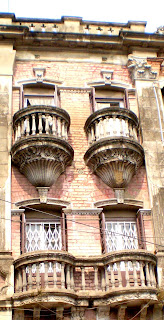 a verandah in a dilapidated house with beautiful wrought iron banisters , 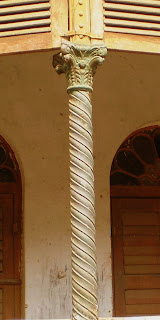 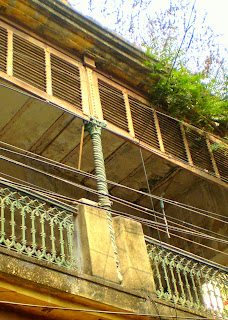 huge trees that must have stood there for years on end .And the ferry ghat .. 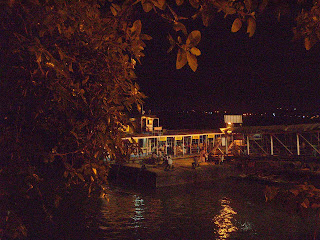 The pujas came early this year and it is just now that the clouds are laundered white and fluffy and the sky an impossible blue . The rain god however was not too mean and we had our share of the good times ... 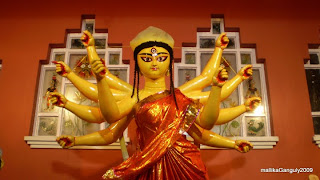 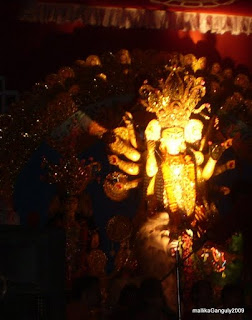 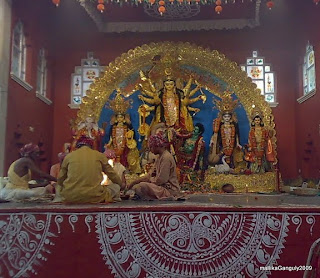 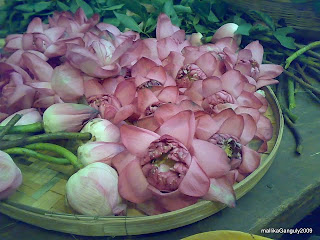 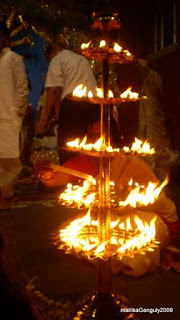 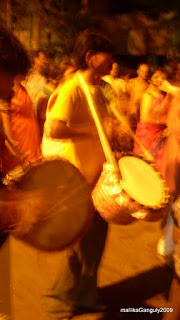 Lovely photographs. I love the old houses dotting Kolkata- they are so beautiful!

Wow, that's fascinating! Talk about going in search of history. This is the side of Kolkata that I don't know at all. Can I go with you on my next visit?

oh my god, rumamashi!! the photos bring on nostalgia SO bad, it should be banned!!

** the word verif is "aterite", which is incredible. i have been CRAVING barir khabar this past week

Thanks all .
Sandeepa - that's the para mondir-where we have the puja - just a few families - its like a barir pujo

Dipali,Ana,Manjari- Thanks
Kaichu - next time you me and Rimi

That was a beautiful post, Evie. Very nice indeed. Want to go for a walk down Sobhabajar way once winter's here?

I'lll come back to read this again. In the meantime, your eye for frames deserves more than a phone-camera.

Sue - we'll do that walk in December
JAP- Jeez man - those were taken with an Olympus 220 . Except for the lotus and Nabami pic

Hi,
I am working for a newspaper article and was given your contact by Padma Ramchandran (Hip Hop Grandmom)..
Can you please email me at gauri.gharpure@gmail.com so that we can take this forward?