This is what The Telegraph has to offer this morning as a derogatory comment on the state of the declining law and order situation in West Bengal . 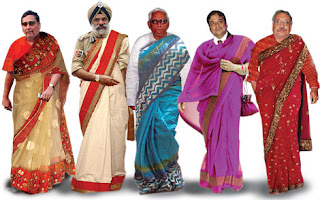 Although there is a disclaimer below the picture , apart from the political scenario in West Bengal which actually prompted the piece as well as the "haha" photograph ,I wonder what exactly the paper wants to convey - that women are indecisive ? Or inefficient perhaps ? That to take command of a situation you have to hitch up your jockstraps, light a Marlboro and ride off barking orders left and right and lay about you with a cudgel if they are not followed ?That only a man , by default , can be the ruling faction ?

And then , by the law of deduction, if a man cannot do all these things , put him in women's clothes , slip a few bangles on his wrists and make a mockery , not of the man actually, but of all womankind in general ? By de categorising him, in effect ?
And then they slip this in the Metro section of the paper and call it role reversal ..... 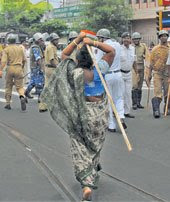 (photographs downloaded from The Telegraph)
Posted by Unknown at 9:25 pm

Email ThisBlogThis!Share to TwitterShare to FacebookShare to Pinterest
Labels: javascript:void(0)

Can't believe that in this day and age! Ridiculous.
btw , love your new banner :-)

I agree Mrs G, that is not a funny photo. It's pretty offensive to any woman. Still, you must console yourself that these men are actually the law makers - and they haven't done a very good job. Fact. We don't need to say much else do we?

We are following up on our invitation to you to sign up as a OI Mystery Shopper. Is there any specific question you have or any doubt that we could clarify for you? www.sassieshop.com/2eyp is the login website. In case of any difficulties signing up, give us a call on +919769781001 or shoot us an email at support@onioninsights.com.
Hoping to hear from you soon.

Cliches, cliches!
This is unbelievable. Which era are they in?
Want me to come over for a protest rally outside the newspaper office?

Unbelievable ! Your post is wonderfully written and so on target.

@HHG _ really ,I ask you and then the next day they ask us to be tolerant about the joke
Itchy my love - yes yes I shall do it
Mrs T -Fact . But not bolstered by nonsense :)
Usha - come , Im game and can ring up numbers
Onedia - unbelievable is right . I couldnt believe my eyes

I stopped buying Telegraph earlier this year and switched loyalties to Hindustan Times. I'd like to ask those who make a joke of the femine energy in this manner whether men can multitask like a woman even for a single day? were it not for their female partner many men would fumble and falter when asked to make quick decisions. It is quite another thing that when things go wrong they'd quickly blame the wife.

Achchha, I'm not liking your profile pic. Your eyes are nicer than that!

And haven't I told you, Telegraph poro na?

It will be a long time before they will even begin to see that this is offensive... and it is interesting that when a woman is being aggressive she is behaving like a man.
Haven't you heard :"She maybe just a girl but she will be a son to her parents!"?

How very offensive! Sends out wrong message out....

Hey very nice blog. I thought The Teleraph would know better given that it took a woman to get the CPIM to heel after 20 yrs. No wonder i read the Statesman when i was in calcutta

Ki oshobbho. Shubho Bijoya. Where are you??

We are a group of students from cochin who are currently building a web portal on kerala. in which we wish to include a kerala blog roll with links to blogs maintained by malayali's or blogs on kerala.

you could find our site here: http://enchantingkerala.org

the site is currently being constructed and will be finished by 1st of Oct 2009.

we wish to include your blog located here

we'll also have a feed fetcher which updates the recently updated blogs from among the listed blogs thus generating traffic to your recently posted entries.

If you are interested in listing your site in our blog roll; kindly include a link to our site in your blog in the prescribed format and send us a reply to enchantingkerala.org@gmail.com and we'll add your blog immediately. Ypu can add to our blog if you have more blog pls sent us the link of other blog we will add here

pls use the following format to link to us

Write Back To me Over here bijoy20313@gmail.com

hoping to hear from you soon.

Are you paying over $5 / pack of cigs? I'm buying all my cigs over at Duty Free Depot and this saves me over 70% from cigs.