The last of Sushama's brood 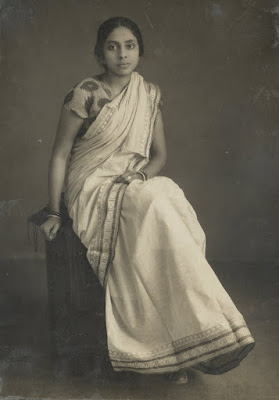 In the early pictures , she is solemn , sulky even , shrinking perhaps from the more glamorous looks of her older sister or the two brothers , one older , the other a little younger but petted , being then , the youngest . Two more that lived were to follow . The expression remained the same persisting through time - worried , anxious and solemn , a sign of the pressures brought on by looking after a family when her father died . Her mother , delicate and coddled with her nose forever in books ,was not much good at budgeting and shopping and much less at managing mischievious five and seven year olds .
In times of stress and trouble her three brothers turned to Mili for advice , often having to face the wrath of their wives .Despite this , her sisters in law loved her .I know my mother did . She was our support when my father died .It was she who gave me emotional support when I was alone in Calcutta and it was she who met Ashis first when we were going steady .
In all her activities related to her family she was joined by and supported by her husband - a student of Freud and Jung , who was the sweetest , most lovable person I ever knew their love for my father and his family being unconditional .
She was tall and elegant with a long patrician nose , a clear skin,long artistic fingers and a superb sense of style that we tried to emulate .
In later years , after her husband's death ,she was to emigrate to Canada which she had left reluctantly in the late 60s . Later ,she had Alzheimer's disease following a stroke which left her semi paralysed . Often she would strugle to get up and put on her trainers to go the Park next to her house because her husband was waiting for her there .
In moments of lucidity she would remember her family. Her voice once firm and authoritative was quavering and high pitched , ghostly even.She would ask after my mother now gone for the last 9 years .
To speak to her was emotionally unnerving because this was not the person I said goodbye to when she left excitedly for Canada in the early 90s . She died in late December 2009 , going peacefully with her daughter beside her , in the hospital .
With her went the last of Sushama's brood - the stormy Shefali doomed to die very young , Amala who was to die in a lunatic asylum because she was psychotic and it was dangerous to keep her in the house , Mukul, my father, ravaged by disease dying at a ridiculously young age , Bulbul the eldest who followed my father soon after , dying of cancer , Prabhat the glamorous and handsome brother we rarely saw , also dying of cancer and last of all Kamala , the bulwark against all adversities true to herself , dying last .
Posted by Unknown at 8:53 am

Email ThisBlogThis!Share to TwitterShare to FacebookShare to Pinterest
Labels: family

What a wonderful lady she was!

What a lovely tribute to your aunt and I do wish you had posted a picture to accompany the word picture.

She was one brave lady. You are lucky to have had an anchor like her. Thank you for sharing.

Beautiful and tearfully poignant. Thanks for sharing that deeply personal tribute with such love.

Thanks for putting up a picture. She looks pretty.

I can understand your anguish. Your aunt's role is similar to my aunt's. The love for her brother and his children, the brother dying young, all of it bring back memories. What can i say. There is no way we can keep them going on for ever. Life goes on but somewhere, deep down in our hearts our love for them keeps telling us that they are very much with us. God bless her soul. it was nice reading about her.

Such a beautiful portrait.

I came upon this blog quite by accident.
Lady, you can write.
Damn, I felt like I was reading myself at times in your earlier posts, especially the one where you recreated the murder of a mad dog.
As for this post: your grief shows so beautifully through that it elevates instead of enervating.

What a lovely photo. Some women just awe you with their strength and warmth.

It's sad isn't it when a large brood of sisters and brothers starts dying out. I've been witnessing that with my father's siblings, a generation fading away.

i keep coming to your blog and leave without commenting because i am filled with awe each time and i run out of words.
this one made me cry.
dont know if that qualifies to be a comment,but that's all i can bring myself to type out.