A piece of fish 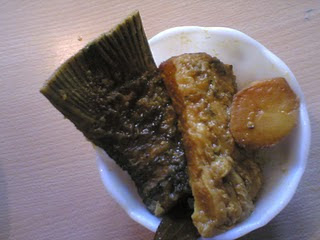 She had spent most of her young life in and around the kitchens of the huge house where her mother , a tall ,spare, stern Brahmin widow, a distant cousin of the master of the house , was the cook . The girl's hair was cropped close to her head and her attire was a homespun white sari . She had been married when very small, to someone who died shortly afterwards - she herself had no recollection of the man she had married ,but the fact that it was short lived was something that was drummed into her every waking minute of the last six years - which was now an eternity stretching forward into a dark, fathomless pit .
Not for her the luxury of food or clothes or even the simple pleasures of rides in the fairs or the colourful bangles and red ribbons , a colourful striped handloom sari ,or even the sweets that the other children enjoyed .
Abstinence and austerity - these two words ruled her life . These and hard work -to keep her soul and body clean and pure . Wash the vegetables which the maids cut , pick the leaves of the sag and wash it carefully, clean the rice and soak it , run errands for her mother. The food she ate was also dictated by the almanac .Special diets on certain days which she shared with her mother .
Cooking held no fascination for her . When her mother cooked fish it was torture . First the cleaning and gutting ,then the slicing of the fish into pieces with the bnonti ,applying turmeric and salt and then frying in hot smoking mustard oil in the huge iron korai (wok). The smell of frying fish was so evocative - she salivated , watching round eyed as the fried fish was deposited on a plate - rui from the master's ponds in the village, crisp and brown on the outside , the flesh ,pale pink and white .She imagined eating it , her eyes closing and toes curling in orgasmic delight at the thought .
She wondered that her mother who never ate fish could cook so well that the master would have none but her cook his meals .
The huge platter with the fried fish was inviting . While her mother prepared the spices for the gravy , the girl looked around the dark ,smoky room now redolent with the smell of fried fish .There was one maid at the far corner slicing brinjals into roundels for frying . Her skinny hand shot out and curled around a small piece of fish .
Panting with the thrill of the illicit , she quickly rushed out . Finding the dark corner she was looking for ,on the other side of the huge tank in the courtyard, she ate the fish , hurriedly but with relish , watchful eyes darting here and there . It tasted like manna , it was exciting , it was glorious . She closed her eyes as she licked her fingers and ran her tongue around her teeth and it was then that the fear overtook her and the sheer magnitude of her act overtook her .
Now she was sobbing with fear and loathing for herself , terrified that someone would smell the fish on her breath and hands and imagining the recriminations and other consequences that would follow .
Could she vomit ? So that the sin could also be expunged along with the fish expelled from her system ? She ran towards the toilets , slipping in her hurry on the wet, mossy cement . Nothing came up although she retched and retched . Now she had to have a bath because she had used the toilets . So she bathed , scrubbing at her tongue and mouth and her body so that the smells she imagined were no more . She rushed to the small room she shared with her mother and changed out of the wet homespun white sari she wore .Looking through her mother's pandaan she picked up a betel leaf chewed on it , her heart thudding violently .Having chewed the leaf she swallowed it and closed her eyes .
Creeping out of the room she made her way to the kitchen where her mother was covering the pan which held the fish curry .She looked up at her , eyes expressionless . The girl crouched over the peeled potatoes scrubbing them in the clean water .
The fish that Surama's mother cooked was rui , a type of carp. It is a sweet water fish and is normally cooked in light thin gravies or in a rich onion ginger based gravy called the kalia .
Ingredients for Rui maachher kalia
This post is my contribution to the Food Fiction event hosted by Aquadaze - Of Chalks and Chopsticks.
Posted by Unknown at 12:08 pm

What cruel customs these are! I hope they aren't practiced as rigidly now. Imagine being deprived of certain kinds of food, apart from everything else. Well-told story.

Very well told Mallikadi. My heart went out to Surama, I always had a strong dislike for these customs. But though the middle class got over them, do you think they are still practiced by a certain strata ?

@ Banno/Bongmom- well the setting is early 20th century Bengal when sati was outlawed but child marriage persisted and child widows especially belonging to Brahmin households were mistreated . Now I guess its a matter of choice whether one eats a ceratin kind of food or not .I am talking about urban Bengal though.

Mallika, the story was heart-tugging.
The recipe is interesting as potatoes are added and there is no garlic!. Here in Kerala, for any fish preparation garlic and something to add sourness is a must.

Widowhood is supposedly a curse on the woman and she has to deliver herself by practicing austerity.It is there in all communities. another reason given is that fish and meat or even garlic and onion for that matter arouse sexual desires and should therefore not be served to widows. Times are changing tho' and why not? Widow bring up children single handed and do everything a man would do for the welfare of his family and children and food restrictions have no meaning as such.

This hurt. It is so true that it makes the heart bleed for so many like her who have actually lived and so many who continue to live such lives. Brilliantly woven with the culinary side of it. I'm going to be thinking of her for a long time now.

Beautifully written. Such cruelty in the name of tradition:(

beautiful story ... i wish i knew what happened when she grew up.

in my recent visit (2009) with an NGO working in murshidabad district of west bengal, i was told that over 78 percent marriages were child marriages in the district. As for customs about widow, it is much less practised in urban bengal today. I would dare say that it is not practised at all today. depriving women of nutrition and other benefits are not only things of the past.

What a heartwrenching story. It is so sad that while traditions like this are no longer practised (at least in urban India), widows are still treated differently. Why the same rules don't apply to widowers, I will never understand.

Surama reminded me of the child widow in the movie, 'water'.
heartbreaking but makes you realize how regressive some of our customs were and probably are.
beautifully written.

Nice tightly written short story there. Well done. I saw a film on this topic .... I've seen Deepa Mehta's film "Water" about this topic ...very moving story. Yours and hers Mallika.

very heart melting story..I would say in villages ,people still dont treat widows respectively(beacause I know villages haven't changed that much..have been to my in-laws native place,things are pretty same there.Although they have started encouraging girl education, but when it comes to these ridiculous customs ,there is no escape.In contrast urban scene has changed a lot..more open and accepting.
hugs and smiles

how beautifully evocative this post is EL. i would have never expected it to be a prequel to recipe! which sounds yummy!

and all these traditions are really heartbreaking! :( sad part is that in some places they still continue to thrive based purely on social sanctions! sigh!

I just wanted to reach out and hug Surama and just bring her home with me.
And the picture and the description are so evocative that I wanted to try it too. mmm yum, altho I have never eaten fish in my life.
This concept is so lovely - combining fiction with food.

Very well written. I could picture and identify certain people I have seen in my life.

Thanks for dropping by my Blog. :-)

Tomaar Kalia ta khoob similar to something I had made a few days ago. Except aami kancha lonka di ni aar ghee-o di ni. :-(

@all - Thanks for your beautiful and encouraging comments .

My favourite dida was widowed about six years ago, in her early sixties. She won't eat fish or wear any but the simplest sarees (no forbidden colours on them, of course) because the misbegotten relatives who live nearby make scathing remarks about "widows who think they can do anything now that their husbands are dead."

It makes me want to tell these bastards something about people who think they can ill treat wonderful little old ladies just because they are now on their own.

Hip Grandma -- Your comment reminded me of something my father once mentioned offhandedly -- the widow's diet is one way of literally starving the woman, depriving her of basic nutrients, shortening her life term.