.. and some thoughts on how a Bong Mom cooks 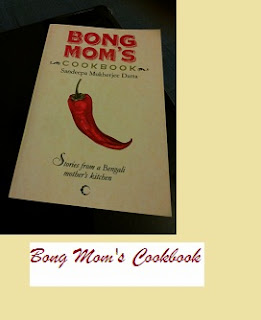 Sandeepa the Bong Mom is one of my oldest blogger pals way back from around 2005 . I have no recollection of how we met but it has now ended up in a bonding that transcends space and brings us together. Having ordered the book on Flipkart , I waited patiently for it and ultimately ended up buying it from Starmark because I was frankly impatient to read it .

Reading her eponymous book is like a coming home of sorts because the recipes she shares are reminiscent of my mother's cooking . The book is largely anecdotal in nature bringing together nostalgic memories of an idyllic childhood in small towns , her grandmother's house in Kolkata ,her culinary forays in Bombay and Bangalore and finally America which sees her evolving as a cook  . Through  all these places she lives in  , there is one tough string binding all together and that is , food . Her language is intimate ,personal , humorous , conversational and extremely fluid, enabling her to connect easily with the reader .

Most of the recipes she shares are from her blog to which I normally turn when I'm at a loss as to how to go about making , say , a labra or alur dom . I swear by her mother's alur dom , incidentally .One gets the impression that Sandeepa cooks with "toribot" which roughly translated would imply with care , elaborate preparations and of course , with love . She cites her grandmother who did not care much for precise measures - basically a pinch of this , a soupcon of that and a smidgeon of something else !

The recipes are quintessentially Bengali for the most part and the book is divided into sections , covering vegetables , meat ( the roast chicken or pepper chicken s phenomenal and I say this with authority because I tried it out last week ) , the roll - chop-cutlet without which no Bengali jolkhabar was complete when we were growing up , fish and desserts . They are easy to follow and therefore , to cook - the hallmark of  a good cookbook . 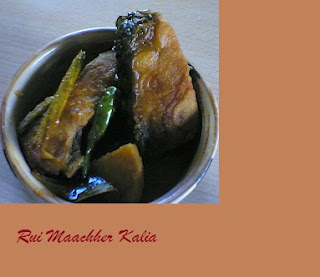 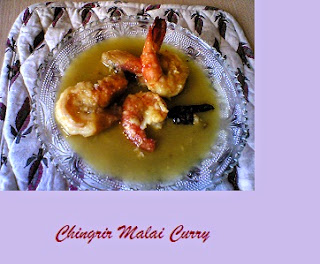 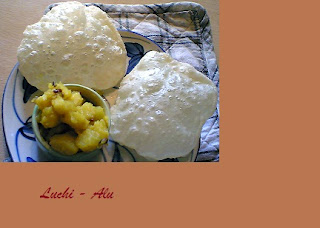 Her book brings to mind  Lila Majumdar's Rannar Boi with its elaborate compilation of recipes from the very easy to elaborate .

So , Sandeepa , here's to the success of your wonderful  book and to many more from your pen !

I completely agree with your thoughts on the book - it makes me nostalgic and hungry all it once! So many of the things I cook (in my limited repertoire) come from that one blog. Cheers to Sandeepa for writing it, and to you for breaking your long silence with this review :)

Mrs G - you've blogged! And about food too - how very, very naughty:))

Good luck to Sandeepa and her book may she have lots of success!

I've been reading her book these last two nights and it just maks me feel so good that I don't even mind feeling hungry as well (after a full dinner, mind you.)

Such a delightful book, this!